Fishing with my "Tata"
by George Will 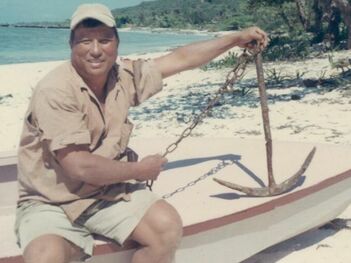 Decimo sitting on the 12-foot boat he built from mostly beach lumber; George provided the brass screws. Anchor was rusty when he found it while spear fishing.
I lived with a family on Rota. Decimo was the father (Tata). He was a fisherman during the dry season and a farmer during the rainy season. He had built his twelve foot boat by himself from odds and ends that were lying around, either given to him or from what might have washed up on the beach. He had a 9 HP Johnson outboard motor attached and was able to fish well beyond the barrier reef.

I would fish with him on weekends and at every opportunity. I had fished since boyhood, but never had used hand lines to fish for big fish. As one can guess, it was hard on the hands. Fishing rods would have been easier and more fun, but we didn’t have that luxury. We were usually lucky and caught enough to feed the family, neighbors and friends.

So, there we were, out so far that we could just see the top of Wedding Cake Mountain, when all of a sudden a whale emerged from the depths. We were trolling and had lines out. As the whale came closer and closer, we became concerned and started pulling in the lines hand over hand, over hand. There were fish on and this made it harder. Decimo revved the engine, muttered “Santa Telipis!” I kept pulling. 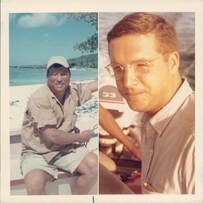 Decimo & George
The whale was now chasing us. We didn’t know if it was for fun or for the fish on the lines, but we did know that the whale was so close we could almost touch it and we thought we might capsize. Of course we didn’t have life jackets - not that it would’ve mattered as there were plenty of sharks around. We felt much nervous excitement as the race was on!

​We pulled the fish aboard and the whale suddenly decided to go elsewhere as we came nearer to shore. Both of us breathed a sigh of relief.
​
Well, as you can imagine, fishing was OVER for that day