​
​Here is the background on how this MicrOlympics story came about:
First, Kit Porter Van Meter, a Returned Peace Corps Volunteer (RPCV) who lived and worked for many years in the Northern Mariana Islands, developed this website within the past two years to make available to Micronesians and other interested people her vast collection of archived materials from Micronesia.

Next, in February 2019, Kit reached out to other RPCVs who had served in the Northern Marianas and invited them to send photos and stories of their Peace Corps experience to incorporate into her website. Some of those who responded sent pictures of the Micronesian Olympic Games that took place in July 1969 on Saipan. At that time Kit expressed a hope that someone might offer to put together the memories and pictures into a story for the website in recognition of the 50th anniversary of the Games.

And that’s where I entered the picture: I offered to assemble a narrative about the MicrOlympics based on what others had submitted. I dug through my own personal Peace Corps archives and found several published accounts of those first Games with team rosters, the schedule of events, and a list of medal winners. I contacted fellow Saipan RPCVs who played key roles in organizing for the MicrOlympics and had many enjoyable conversations that unearthed some previously untold (but not scandalous) stories.

​My goal with this “Featured Story” was to combine those multiple elements into a coherent narrative. I wanted to provide context for some of the best images, and to provide some of the back stories that are not readily apparent from just looking at the pictures. I hope you enjoy the read, whether this is your first introduction to the MicrOlympics or you were there “on the scene” fifty years ago. 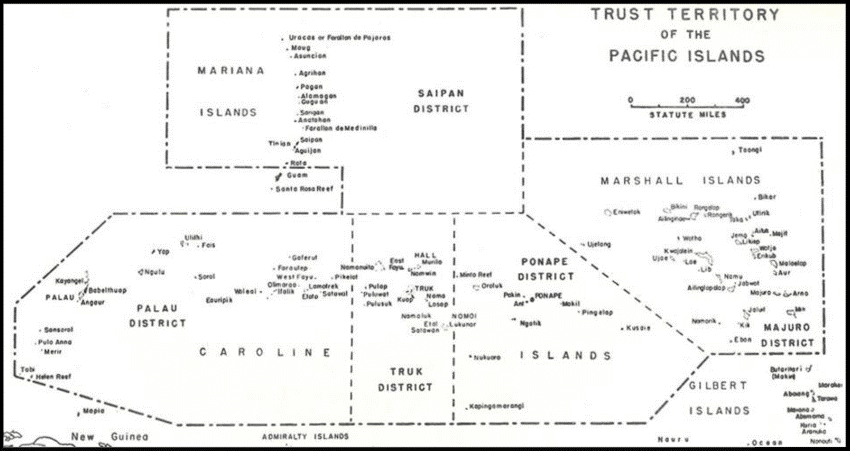 From a vast territory of more than 2,000 tiny islands spread over more than three million square miles of the Pacific Ocean, divided into six administrative districts with eight major languages and numerous dialects, 450 athletes, hundreds of volunteers, and thousands of spectators all came together in the territorial capitol of Saipan, Mariana Islands, in the first two weeks of July in 1969 for an historic event in Micronesia. The first Micronesian Olympic Games (“MicrOlympics”) began on July 4th, US Independence Day, and concluded on July 12th, Micronesia Day, so named in observance of the founding of the Congress of Micronesia.

The MicrOlympics was a tremendous accomplishment for all of Micronesia. Many people—Micronesians, Peace Corps Volunteers, and other Americans living and working in the Trust Territory—gave of themselves--their time, talent, skill, and sweat: to build the infrastructure on Saipan for the highest level of regional competition in the Trust Territory’s history; to select, train, and prepare Olympic teams in all the districts; and to serve in a variety of roles during the Games. It took a massive, coordinated effort across a vast oceanic territory.
​
To watch 450 athletes climbing, sailing, paddling, husking, dribbling, jumping, sprinting, catching, spiking, batting, setting, rebounding, pitching, serving, diving, throwing, swimming, leaping, bumping, hurdling, fore-handing, back-handing, and running was an experience never to be forgotten. There was sense of being a small part of something much bigger than yourself. Peace Corps Volunteers throughout the islands played an essential role in making the MicrOlympics possible. Everyone pulled together in an upswelling of support for the first large-scale, unifying event in Micronesia. 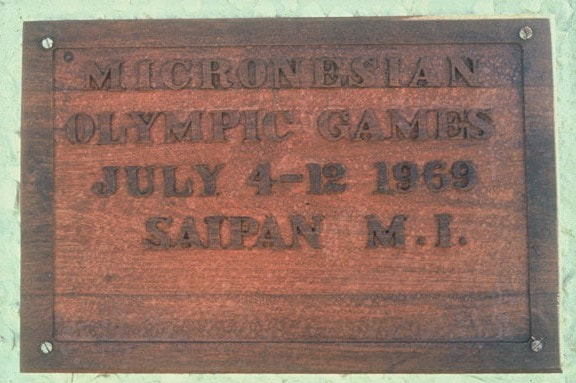 This is the hand-carved plaque on the stand that held the Olympic flame.

The following narrative is not intended to be a complete history of the MicrOlympics. It is simply a story told in retrospect, constructed from the recollections of Peace Corps Volunteers (PCVs) who were there fifty years ago when this historic event took place. I was a PCV on Saipan in the Mariana Islands, and this narrative is based on information received from former PCVs I knew then and maintain contact with now. They served on planning committees, worked on facility construction, coached Marianas teams, served as officials during the Games, took photographs or films, and some kept journals of their experiences.

Much gratitude goes out to those who helped make this possible by turning up gems from slide collections and other memorabilia, unearthing 50-year-old memories, and sharing laughs and lore as we tried to resurrect the MicrOlympics story from so many years ago: Kurt Barnes, Tom Fisher, Andy Pavley, Ted Goble, Fay Giordano, MZ Morgan, Dave Crutcher, Kathy Bradbury, Ralph Chumbley, Bill Sakovich, Ward Miles, and Jean Olopai.

Many PCVs from the other Micronesian districts made important contributions, but making contact with them was not possible for this story. I have done my best to craft a readable account of those remarkable nine days in July 1969, and I recognize others will have different perspectives and memories. If you are reading this and have photos or stories to share, you are encouraged to use the “Contact Us” page on this website.

A note about names: This story uses the names of the six districts of the Trust Territory of the Pacific Islands (Micronesia) that were in use in 1969 and appear on the team uniforms in photos. The names in parentheses are the current names of these island groups: Marshalls, Yap, Palau, Truk (now Chuuk), Ponape (now Pohnpei, which included Kusaie/Kosrae), and Marianas (now Northern Marianas).