Track & Field: Sprints
Palauan sprinter, Eliezer Sebalt, won gold in all three men’s sprint races, the 100 meters, 200 meters, and 400 meters. Here he is (#102 on the left) rounding the turn in the 400 meters beside runners from the Marshalls, Marianas, Ponape and Truk. Eliezer also led Palau to victory in the 400-meter relay and the 1,600-meter relay. His total was five gold medals. Among several outstanding female athletes, Clara Joshua of Palau took home four medals, including gold in the 100-meter dash.
​Swimming
​The Ponapean women’s swimmers won 11 of the 17 medals awarded at the Microlympic lagoon pool, including gold medals in all six women’s events: the two freestyle races, the breaststroke, the backstroke, and the two relays. Eltrihne Doses and Kandalaria Bergen led the way with five medals each (below).

​Of the 27 medals in men’s swimming, the Palauan team won 14 of them, including gold medals in all three freestyle races and both relays.
Volleyball
Most Versatile
​Tony Towai from Palau was probably the most versatile athlete at this first MicrOlympics, winning medals in all six events he entered. At the track, Tony won silver medals in the 110-meter hurdles, the high jump and the pole vault, and gold on the 400-meter relay team. He was a dominating pitcher on Palau’s gold-medal-winning baseball team and an outside spiker on their silver-medal-winning volleyball team.​
Here are the overall medals totals for the 1969 MicrOlympics:

Fifty years is a long time. It has been exciting for me to find out not only that so many RPCVs still have clear memories of that special time in July 1969 but also that we had so much fun reminiscing about it. Prior to that time, sports competitions in the islands were limited to high school events, island sports leagues, and holiday track and field contests. Kurt Barnes, one of the originators of the MicrOlympics idea, said that the most important legacy of the 1969 Games was they broke through that localized concept of athletic competition. They opened the door and got the ball rolling towards future participation in regional sporting events. Just six years later in 1975, Kurt took a team of top Micronesian athletes to the South Pacific Games on Guam. In 1990, 21 years after the MicrOlympics, the second Micronesian Games were held on Saipan and have continued every four years since then.
Many of the athletes who won medals at this first Micronesian Olympic Games are remembered and honored as Micronesian sports legends in Kurt Barnes’ 2012 book, Sports Legends of Micronesia: 1966-2012. Kurt’s purpose with the book was to keep alive the memories and the legacy of outstanding athletes from all the major island groups in Micronesia, whether from five years ago or five decades ago.
This MicrOlympics narrative has a similar purpose. Although much smaller in scale, it was written to keep alive some of the stories, memories, and results from those first Micronesian Olympic Games, let they be lost and forgotten.

Artifacts
​When I began the research for this brief history of the MicrOlympics, I wondered if we’d be able to turn up any Olympic medals still in the possession of athletes or of athletes’ families. Thanks to Bill Sakovich, a medal has been located. Bill lived and worked on Saipan from 1973 to 2004 and played a big role in reviving the Micronesian Games in 1990. He returned to the island in late March of this year. In his interest in the first MicrOlympics, he visited Jean Olopai, a Marianas RPCV in the early 1970s, who is married to Tino Olopai, who ran the last leg of the torch relay and lit the Olympic caldron. Tino played a key role on the Marianas bronze-medal-winning basketball team. While they talked, Jean brought out the medal that she’s kept all these years: 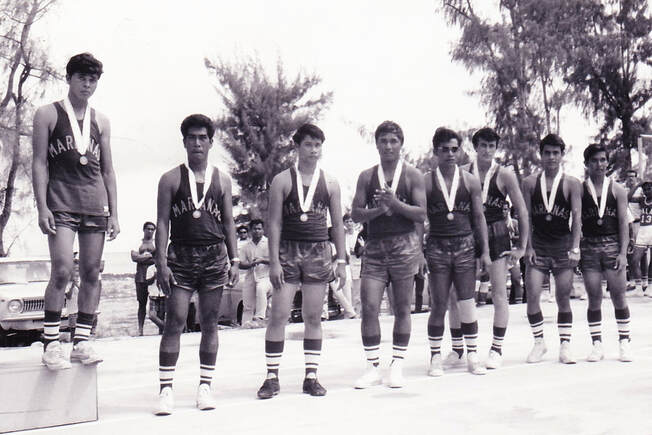