The Torch Relay
The opening ceremonies had several moving parts that required a high level of coordination. Al Snyder was an excellent organizer and had everything planned to a T: the torch relay, the parade of athletes, and the lighting of the (new) Olympic caldron. On Friday morning, the 4th of July, the Olympic torch was lit from the bonfire on Mount Topachau. Kurt Barnes, equipped with a walkie-talkie and driving Felix Rabauliman’s Jeep, transported a handful of Saipan elementary school track and field champions as they took turns bearing the torch down from the mountain towards Beach Road.

​Awaiting the torch were six athletes, one chosen from each district, who would accompany the Marianas’ runner, Tino Olopai, the final distance around the track to light the Carolinian-cookpot cauldron. Standing with them was Al Snyder whose walkie-talkie told him Kurt was calling. Kurt said to Al, “Watching these little kids running this torch down the mountain is the greatest thing you’ll ever see, Al.” Al replied, “No, it isn’t, Kurt. It’s the 5,000 people waiting down here for the torch to arrive.” But then another hitch occurred. The torch went out. 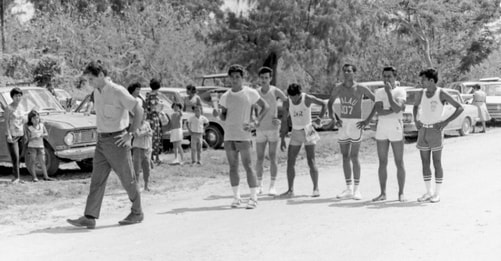 The torch’s kerosene supply lasted all the way down the mountain but gave out just as the final youth runner handed the torch to Tino. Al Snyder, Tino, and a few others huddled around the torch, and quickly refilled the kerosene and relit the torch. There is no way to independently verify the following, but this photo might be the aftermath of the in-the-nick-of-time torch re-lighting: Al Snyder, walking away to the left, Tino holding the lit torch, and the other five athletes awaiting the signal to proceed onto the track.

There are tales remembered even today about fears of “island magic.” Kurt Barnes recalls that Yap did not want to walk behind Truk for fear of Trukese “magic.” The decision about where in the parade line-up each district would walk may have taken this “magic” factor into consideration. In his 2013 book, Sports Legends of Micronesia, Kurt Barnes relates a story called “Black Magic” about some of his experiences with Micronesians’ belief in magic: “Felix Rabauliman, the Chair of the Micronesian Olympics Organizing Committee, and I were leaning on my pickup truck outside his house in Oleai Village on Saipan. It was dark and only a few hours before the Games’ opening ceremonies were to begin. During a lull in our conversation, Felix looked at me and in a very assuring and knowledgeable tone of voice said, ‘Prim, tomorrow and in the next few days, you will see the power of the Trukese (as Chuuk was known in 1969) magic. They will win most of the medals.’”​
​MicrOlympics Parade
Meanwhile, the athletes, dignitaries, and color guards were assembling on the grounds of Mount Carmel School in Susupe. The parade made its way along the one-mile distance to the Olympic track just south of Oleai village. The parade set out from Mount Carmel in timely fashion.

Among the many MicrOlympics images submitted by RPCVs who were on the scene that day, I was able to find a photo of each district’s team walking in the parade. I also found a parade description on page 2 of the July 15, 1969, issue of Highlights, the official Trust Territory government newsletter. The photos help to illustrate the written description; the bolded parts match the photos:
​​Right on time, the six torch-bearing athletes ran along the back stretch of the track around to the caldron near the reviewing stand. The athletes behind Tino Olopai are (L to R) from Truk, Ponape, Palau (partly hidden), Yap, and the Marshalls.
Tino raised the torch and lowered it into the caldron. The burst of flame, symbolizing the official start of the Games, brought a rousing cheer from the thousands looking on. 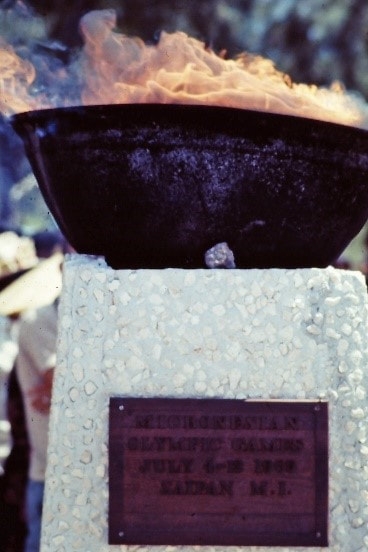 Here is the Olympic flame blazing in the Carolinian cookpot with the hand-carved “Micronesian Olympic Games” plaque attached to its concrete stand.
Proceed to Next Page [pg. 4]